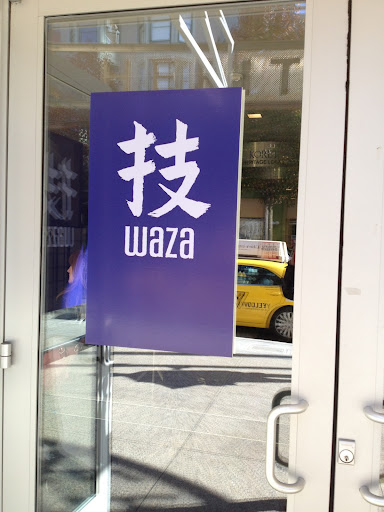 Two days ago I attended Waza, Heroku’s first developer conference, “a free developer event for the study of technique” (Waza means technique in Judo and Aikido).

It was a very good event, held at Yoshi’s San Francisco, a wonderful jazz club/japanese restaurant. The choice of venue meant they kept the event small, I counted between 200-300 developers, but there were cameras everywhere, and all talks were taped, so I expect the videos from the talks to be published soon. Holding the event in a jazz club made it very convivial, there were tables, couches and seats everywhere, which favored small groups gatherings and conversations, and that part worked really well, I saw developers in conversations everywhere. They also had alcoves specialized by topic (Java, Ruby, Data) where you could come sit down and ask questions to Heroku staff. Heroku is now part of Salesforce.com, and you could feel the powerful Salesforce marketing machine behind the event organization: stylish decoration, with a purple theme, including purple lightning in the whole venue, Japanese theme, exquisite sushis and finger food, green tea and even drip coffee.

What worked a bit less well were the rooms: the large concert room holds 300 people comfortably, but the 3 rooms were other sessions were hosted held between 20-50 people maximum, it was hard to hear and you had to stand during the sessions.

Here are a few pictures I took at the conference, to give you an idea of the atmosphere.

The talks I found the most interesting were:

The conference ended with Rob Pike opening a barrel of Sake with a hammer, Sake for everyone,, an open bar, and a live concert by Devotchka.

Overall this was a great event, very polished, with some solid and interesting talks, both specific to Heroku’s platform, and some more generally applicable to any application you are building using any cloud service. I will update this post when the videos and slides for the talks have been published.

On the Cloud Foundry side, our developer events so far have been a bit more grassroots, like Google developer events in the early days: no sushi, concert, sake or drip coffee: just engineers, source code, demos, presos and pizza:-) Next week, tuesday 1/17, the Silicon Valley Cloud Computing Group organizes a meetup about Cloud Foundry in Palo Alto. We were initially planning to host it at the VMware cafeteria, but 600 developers signed up, so we had to move it to the Crowne Plaza. I hope to see many of you there, it should be fun. If you are coming and don’t have a Cloud Foundry account yet, you can signup with this promo code to get your account right away.